I overheard you talking to each other while you played with your dolls. I was relieved for the few minutes of conflict free cooperation amongst you. But what you, my youngest munchkin, said was far worse for me than one of your epic battles.

“I wish I had blond hair and blue eyes and was pretty like Barbie.”

I read about stuff like this all the time. It didn’t really matter of course until you said it because I thought I was doing such a good job by giving you confidence that looks don’t matter and everyone is beautiful in their own way etc etc.  But of course you do not live in a bubble and I cannot shield you from our increasingly shallow world. I suppose it was my fault for buying the damn dolls in the first place, but you know the thing is every mom wants her little girl to have nice toys. I just misjudged what nice is. Thanks a lot Mattel.

I tried to fix this problem by going out and finding some brown skinned, black haired dolls. Voila, thank you Disney for Mulan, Pocahontas and Jasmine. Although they should have done their homework because no, that is not what Arab princesses wore.  Belly dancers yes, but Jasmine was not a belly dancer. Also Pocahontas was only about ten or eleven and apparently she never saved John Smith.  Yes unfortunately women are objectified. A lot. I will explain what that means later, right now let’s just stick to My Little Pony. Okay yeah it has something to do with how they look in certain clothes. Yes, a certain lack of clothes. Thanks a lot Disney! Yes the bumpy parts that are barely covered by their skimpy clothes. No, it is not something good to walk around like that. Your body is yours, it should not be on display for everybody to ogle at! 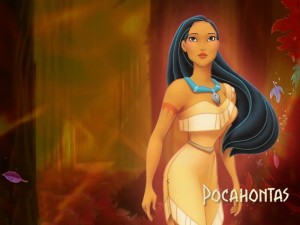 (What exactly is the message here?)

Anyways looking pretty means different things to different people. There is not just one way to look pretty, in some countries the idea of pretty is very different and many of us wouldn’t see it as pretty. Like the giraffe women of Burma.

And some countries in Africa have tribes that take great pride in lip plates….

Ouch, but it is beautiful to them.

More importantly I also want you to know that looks are not everything. Even if, eventually, the entire world goes crazy and thinks that they are. The thing that matters most is what is inside, and what you do with it. You can’t change the way you look, but you can change the way the world looks at you.

Mulan , Jasmine and Pocahontas didn’t actually look like that by the way. No one looks like that. Jasmine wasn’t even a real person. Yes models are real people, but no they don’t really look like that. Their pictures are photo shopped to make you think they look like that. Why? So women and girls spend their money on makeup and silly products because they think they will look like that. Yes there are people who make money out of fooling people. It is not a good thing, but it is a thing.

Never mind. So according to the legend, Mulan was an awesome girl who fought in the war in place of her old father who couldn’t fight. Do you think she worried about her hair? No.

What do I mean by legend? Well legend means that it might or might not be true, but there must have been something to  the story. Okay here’s a story that I can assure you is true.

There was once an Arab female warrior that fought in many wars hundreds of years ago, during the time of the Holy Prophet. Her brother, who was a knight, had always been very proud of her and taught her to handle her sword so well she became a skilled fighter. She was also a great poet. She was smart, brave and she eventually led an army into battle!

When her brother was taken prisoner during a war, she didn’t sit back and let someone else go save him. She led an attack, won the fight and saved all the prisoners including her brother. She fought fearlessly in lots of battles and stood by what she believed in, she inspired men and women because of her bravery. One time she was captured by the enemy, you know what she did? She motivated the other prisoners and together they fought their way out with tent poles and pegs as weapons! She didn’t let anything get her down and she probably didn’t own any glittery lip gloss or whatever it was they used back then.

I can tell that you like this little bit of history.

“She was awesome! Was she brown?” You ask me.

“Did she have long black hair?” you want to know.

“Was her name Jasmine?”

“No. Her name was Khaula. Khaula Bint Al-Azwer.” I answer with great satisfaction as wide grins spread across your precious coffee colored faces. 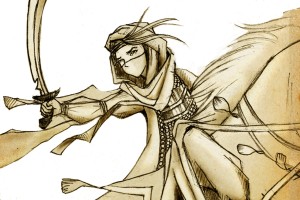 (Disclaimer: I have nothing against girls playing with dolls, but we need to teach our girls they have the ability to be so much more than just pink frilly show pieces. There are more important things than looking good and taking endless selfies. Warrior is meant in the metaphorical sense, I am not encouraging girls to pick up arms and start a war. However if they are keen to learn fencing or archery I say go for it!)